It was in the Fall of 1955, when Mrs. Jean Goode and Miss Hope Holmstead from Red Cross Headquarters appealed to the Islington Branch to initiated a pilot project for Seniors. 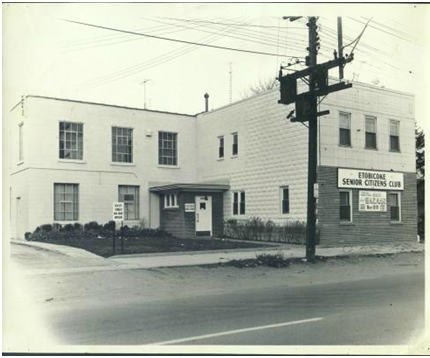 Seniors of Etobicoke were invited to a social evening at the Royal Canadian Legion Hall, Branch 210, on Bloor St.The Etobicoke Senior Citizens’ Club (as we were originally known), was born and atthe same time a Council was formed to act as a governing body, with members of the Health &Welfare, Public Health, Etobicoke Township Recreation Department, V.O.N.,Red Cross, I.O.D.E., Branch 210 Canadian Legion, Kingsway Kiwanis, Humber Valley Kiwanis, Lions Club, Civitan Club, Le Pages Real Estate, and the Ministerial Association. The Seniors would meet three times a week in premises provided by the Legion, Y.M.C.A., and Mitchell Fuels.Red Cross volunteers started craft classes under the direction of Mrs. Edith Stanford, and the Club members organized card games, etc.  The club started with about 14 people.  Membership was $1.00 a year and .25¢ a meeting.

The club had no permanent home therefore, no storage!  Everything was kept in boxes and packed and unpacked from the trunks of cars; chairs, tables, food, crafts etc.  The joke was that most of the time, the seniors were loaded.Through the efforts of the Humber Valley Kiwanis Club and the Etobicoke Senior Citizens Council chairman, Mr. Roy Davey, the Township of Etobicoke agreed in October of 1959 to make the present building at 4968 Dundas St. available to the Senior Citizens Club.

The members of the Humber Valley Kiwanis began to renovate the building on Boxing Day 1959.  They worked every Saturday and Tuesday evening, knocking out walls and building new ones, removing an old staircase and replacing it with a new one.  They tore out washrooms and installed new plumbing and replaced the old electric wiring and fixtures.  In many cases, the materials were donated.  They built 2 new kitchens, installed metal fire doors, and finished by painting the entire building throughout.

May 14, 1960 the keys to the Centre were turned over to the Officers of the Club and for the first time the Club had proper facilities.Summer of 1964, they widened Dundas St. and the “L” shaped section at the front of the building had to be removed.  To compensate, a new section was built across the front, which added space in the basement for a woodworking shop as well as additional space on the main floor and a stage and storage space upstairs. 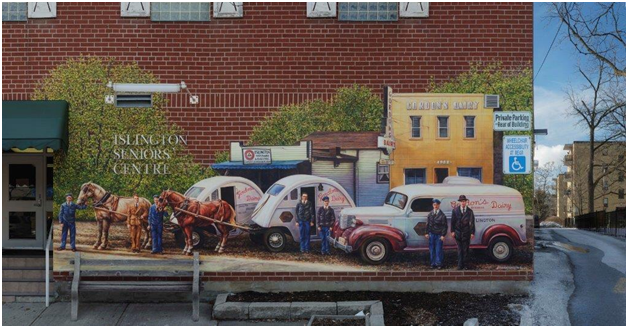 Since then, the Centre has installed an elevator and undergone renovations that have made the facility wheelchair accessible but has always remained in this same building.

The Mural “Gordon’s Dairy”, by John Kuna was painted onthe front wall of the Islington Seniors’ Centre in 2008. It was the twelfth such mural depicting the local landmarks of days past in the Village of Islington. The mural portrays the building as it originally was, with yellow tiles on the façade and a lunch counter and dairy bar inside.In the 1940’s Gordon’s Dairy was a popular hang-out for area youth. The horse-drawn milk wagons were a familiar sight on Islington streets.